Upgrade to a Garmin 235 if you already have a 620, or just cheap out on a Vivosmart HR?

This question was posed on the latest version (Episode 32) of The DCR Podcast: is it worth upgrading to a 235 from a 620? Ray Maker thought it made sense to just buy a Vivosmart HR and use that with the 620 instead of upgrading. I usually see eye to eye with Ray, but on this one, unlike Ben Hobbs, I really don't think he's right here.

I would have thought a 620 in pretty good shape would have sold for close to $100 on eBay, but the market seems thin - I only saw one used device getting bid on - and it was only up to $30. So it isn't prudent at this point to expect the 620 retains a ton of value.

- A better accelerometer for indoor treadmill running.  I find the 235 to nail it as well as a Garmin footpod (which retails for $70) when I run inside -- more accurate (closer to perceived pace and actual pace on treadmill display) than any other Garmin I've owned. My Vivosmart HR was unusually bad on this count - 20% off the actual count in miles. If you do a lot of treadmilling, this accuracy is a significant feature.  The pace and HR below are from a treadmill 5K. 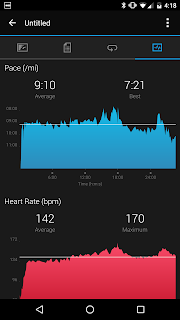 - Garmin Connect IQ watch faces. There are some really functional and even approaching attractive free watch faces on the storefront (and a bunch of other widgets to play with). If you like gadgets and fiddling with this kind of thing, it's a lot of fun.

- One watch to rule them all. It's a lot better to have one device to charge and wear, rather than a band and a running watch - much more convenient.